In the latest installment of the inNorfolk blog, Lucy and The Chap sample the menu at The Globe Inn in Wells-next-the-Sea, on the north Norfolk coast.

The gentle glow of the lights from The Globe Inn, Wells-next-the-Sea, drew us in on a cool, dark October evening. Shining across The Buttlands like a beacon, promising warmth and good food, The Chap and I hurried from the car its open door.

Given that we were about an hour early for our table, we planned to have a little drink and unwind before our meal, but it wasn’t to be. The bar was crammed full of people and there was no chance of getting a table. I couldn’t be disappointed though. It’s great to see a Norfolk pub thriving on a Saturday night.

There was a great atmosphere, with locals propping up the bar, families tucking into huge meals and couples with dogs enjoying a quiet weekend drink. It should come as no surprise that The Globe Inn can serve up to 100 covers per night over peak season. Although the restaurant quietens down from November, it certainly pays to make a reservation if you want to be sure of a table.

Thankfully, our waiter, Lewis, showed us to our table immediately. He led us through to the restaurant and to our table, before handing us menus and hanging our coats.

The restaurant: setting the scene

With high ceilings, the restaurant is decorated in neutral, warm shades, so it feels casual but smart. The cream and putty walls are bedecked with tasteful local art, including paintings of the seafront, while oars are proudly displayed, hinting at Wells-next-the-Sea’s heritage as a fishing village.

The lighting has been carefully considered too, which is often overlooked by restaurants. While it was warm and soft, there was enough light to see the food and the flickering oil lamps created an ambient glow.

It’s safe to say that the restaurant is more sedate and calm than the bar. The tables were nicely spaced out, so that diners have privacy, and we could hear each other speak.

The menu, while compact, has plenty of options for vegetarians and meat eaters, plus there’s a good range of regularly changing specials. In fact, an entirely new menu is set to land in November.

Before I move onto the food, I want to point out that the wine list has a good selection available by the glass. I went for a smooth white rioja (£7.50/250ml) to go with my meal, which was pale yellow, light and fruity, with hints of peach.

The food at The Globe Inn, Wells-next-the-Sea

Coated in large, golden, panko-like breadcrumbs, the cheese inside was molten and creamy, which was perfectly accompanied by the rich, thick tomato sauce.

The gentle acidity of the tomatoes cut through the dairy elements, preventing the dish from becoming too heavy.

With just a hint of smoke coming through on the back of the palate, it was divine.

The Chap has a penchant for halloumi, so he’d made his mind up in seconds about opting for this starter.

The halloumi was lightly grilled, smooth and deliciously salty, acting as the anchor point for the meal, while basil pesto drizzled over the dish gave a fragrant finish.

My main came from that night’s specials menu. I had to think long and hard about whether I wanted English-style mussels, French, Spanish or Thai, but in the end, I went for the French classic.

Beautifully presented, garnished with watercress, the bowl was piled high with mussels. And they have to be the freshest I have ever tasted. Sourced from Brancaster in Norfolk, they literally melted in the mouth – and there was very little grit.

The sauce was delicious too. Salty, garlicky and creamy, with soft white onions and the faintest hint of white wine, it felt indulgent and comforting on a cold night. Paired with French fries and bread, it was a full-on carb-fest. 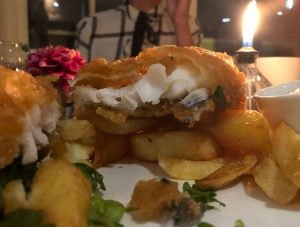 More of a traditionalist, The Chap went for classic haddock and chips. And there was loads of it.

The huge filet of fish was coated in a crisp, light batter and laid over a mound of hand-cut chips, alongside a rocket salad. And there was more food than one person could hope to eat.

The Chap’s report was that the combination of salt, starch and vinegar was enhanced by the earthy, perfumed and slightly bitter leaves in a way that was surprising – especially considering he loathes them normally. 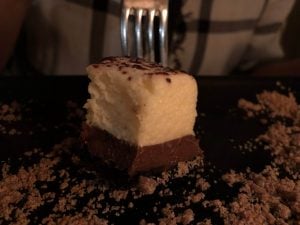 I know this going to sound like I’m going overboard, but I don’t know if I have ever had a pudding so amazing.

A light, slightly sticky and somehow substantial marshmallow, was perched atop a rich, thick chocolate mousse, which sat on a dark chocolate biscuit base. It was decadent in the extreme.

The layers were almost geometrically proportioned, with each layer being slightly larger than the one below it. It was a very elegant dish before I demolished it.

And I should mention that it was accompanied by a strong affogato (espresso topped with vanilla ice-cream) and surrounded by a crunchy biscuit gravel. I could have eaten a portion three times the size. It was such a treat that I could barely bring myself to share it with The Chap.

According to Lewis, it’s the invention of Nicki, the only female in the kitchen – and she is the only one able to make the marshmallow to such a high quality. I think she deserves a medal! 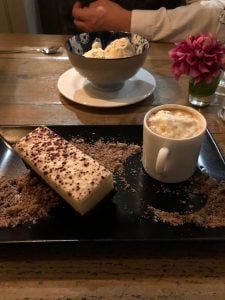 Given that The Chap didn’t finish his main, he chose a lighter option for pudding.

Picking salted caramel and toffee-almond crunch from the selection on offer from Lakenham Dairy, he was very happy with his selection.

The salted-caramel flavour had a great balance of sweet and savoury, while the toffee-almond crunch had a lovely, subtle hint of nuttiness.

The final word on The Globe Inn

We had a wonderful evening in Wells-next-the-Sea. The warm welcome and service couldn’t be faulted. The choice, presentation and flavours were wonderful, while the meal was perfectly paced. We had spent more than two hours at the inn before we ordered our desserts and the time flew by.

This was a press preview for The Globe Inn. If you would like to know more about sponsored reviews, please visit my Press & PR page.