Hawthorn Bar in Norwich is home to some of the finest cocktails in Norwich, as Lucy discovers on her travels 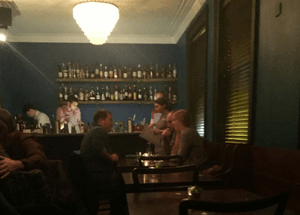 ‘Tis (almost) the season to be jolly and joyous, fa-la-la.

That also means it’s almost the season to sup cocktails. So what better time for me to review the latest addition to Norwich’s cocktail scene, Hawthorn Bar?

Hidden above Lust & Liquor on the corner of St Gregory’s Alley and St Benedict’s Street, Hawthorn Bar is owned and run by Richard O’Brien, formerly of Ten Bells fame. Dare I say, I had high expectations from the outset.

The bar’s existence is marked by an understated sign above a largely unremarkable door. However, the moment you get halfway up the stairs you’re greeted by twinkling fairy lights, petrol-blue walls and wooden floorboards. So far, so fabulous.

The second you reach the top of the stairs, you’re in the bar itself. It’s teeny tiny with no more then six tables, with dark wood, ceiling roses and a brushed steel bar. It’s an elegant, intimate setting for civilised cocktails, lit by candles and chandeliers.

The moment we arrived, we were greeted by a friendly bar keep, who escorted us past the well-stocked bar to a table in the corner. We were presented with a menu and a jug of tap water and left to deliberate the exotic options. 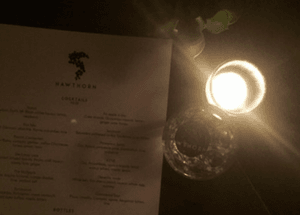 Unfortunately, it was at this point that I realised I’m not the cocktail connoisseur I thought I was. In fact, I had to ask what several of the ingredients were before ordering, because I had literally no idea what some of them were (kummel, anyone?). I have to say that the waiter was very patient as I asked her to explain nearly everything on the menu.

I opted for the Depeche Mode, mainly because it was the cocktail that sounded most like pudding in a glass. Plus, I recognised all of the words.

Served in a frosted glass, the opaque cocktail featured white rum, fino sherry, peach liqueur and a whole egg. Needless to say, I was inebriated quite quickly. From what I remember, however, was that it was most pleasant, starting with sweet overtones and finishing with a potent alcoholic kick. And for all the egg sceptics out there, it was a great addition, creating a creamy, custard-like affair. The topping of nutmeg gave the cocktail a fragrant, spicy aroma.

Thankfully there was a large group of us, which meant I got to try a bit of everybody else’s cocktails too (how else was I supposed to write a blog about Hawthorn Bar without going blind?).

Top of my list was the Bon Mot. Expertly blending St Germain elderflower liqueur, absinthe, thyme, cucumber and lime, it was delicate and refreshing. I could imagine sipping it in a country garden in the summer.

The bright red Devil May Care was also a winner. It may sound extreme, bringing together ancho chilli liqueur, tequila and cassis, but the result is a tangy cocktail, with just a hint of warmth. Most agreeable indeed.

However, if all of those drinks sound a little bit more complicated than your usual martini don’t worry, they’ll make those too (well, except for pina colada, because they don’t stock coconut cream).

Plus, if you’re not into cocktails, there are also bottles of beer and wines on offer, as well as several lovely bourbons. George T Stagg is on the menu for £15 a shot (if i remember rightly), while I opted for a double shot of 4 Roses, which is smooth, with caramel and vanilla overtones.

For £8 per cocktail, it was most reasonably priced, considering I only needed two drinks to end up sloshed. And because it’s such a pleasant environment, I really couldn’t ask for much more.